X
This site uses cookies to provide and improve your shopping experience. If you want to benefit from this improved service, please opt-in. Cookies Page.
Accept Cookies
Give us a Call - 0333 577 1926
PRE-ORDER WITH CONFIDENCE
TRUSTED - READ OUR REVIEWS
FREE UK MAINLAND DELIVERY* ON MOST BRANDS 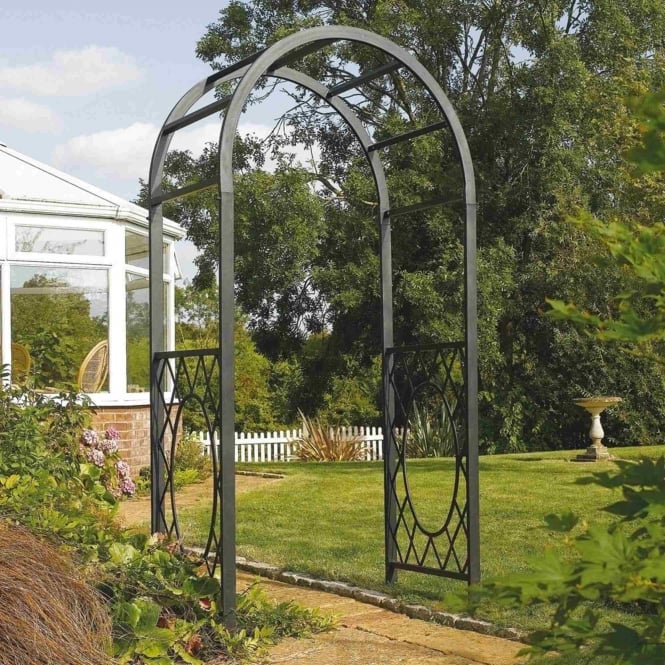 The Rowlinson Wrenbury Arch is the perfect addition to any garden to provide a touch of elegance and sense of height structure. Featuring a gun-metal grey, steel construction, the Arch features a powder-coated finish to help prevent rust, and intricate, stylish latticework.

Providing a steel alternative to the traditional wooden arches, the Wrenbury's grey finish will look stunning in modern and contemporary gardens, in-keeping with the neutral and clean tones of these design choices.

Write a review
Review Summary - 4 out of 5 based on 36 ratings.
Sort reviews by:

A very good quality product, easy to assemble and attractive when assembled. Be sure to check box contents before assembly we did find a couple of washers & nuts missing. Washers are needed for all nuts & bolts to ensure that the nuts do not come loose at any time.

Easy to assemble by one person. Secured by burying feet as far as they will go then using pegs. No movement so far, should last for a good few years.

So pleased with look and steadiness of arch.

So pleased with the quality and exactly as described

This is a lovely, sturdy arch I have lights and flower baskets hanging from it

Beautiful, sturdy arch. One man put up easily. Great service from Garden Street. Just wish delivery company had advised when arriving as could have left note on door to take into back garden. 78 yr old lady had to drag into hall after left on front doorstep.

Nice arch, well made and fairly easy to assemble.
Joints from the arch can be tricky to get aligned but overall sturdy arch.

Cannot comment as I cancelled the order due to dimensions not fitting my path. Review being left due to repeated requests for a review. I can't comment on the product but the cancellation service was quick and painless however it would seem not all my data was redacted.

Smaller than i was expecting but nice and sturdy.

We are very Happy with this arch, it went together well and looks lovely in situ.

The first arch delivered to me was already rusting where the powder coating had been chipped in a few places. This was replaced without much hassle and upon inspection of the second arch, we saw two very small spots where the coating was chipped. I decided that, as there seemed to be no comparable arch to match our design/cost criteria and I was doubting I would ever get a perfect example, I would touch up these spots with some metal paint that I had already and keep it. The arch is fairly simple to put together although, as some of the welded brackets on the rounded top are out of square, it is best not to tighten the bolts until complete. This allows enough flexibility so that everything can be fitted together. It took me about 50 minutes to build on my own. Some of this may sound negative but once up, the arch looks as good and as elegant as it does on the website.

A good product but if it had been galvanised dipped I would have given it a better score.

It's a beautiful arch design, a tad fidily to put together. My only issue is it rust pretty quick which is now making it look at the bottom ghastly. Its only been a week since I received it. ☹️

Unfortunately had to return the arch as the holes were not aligned so could not assemble it.

First class , very strong, well manufactured arch. It took two of us to lift it up after putting it all together - it isn't flimsy - quite the opposite! Excellent value for money.

Decent quality and easy to assemble.

I brought 3 frames to replace an arbour. Fairly easy to assemble. But none of the frames fitted together the same way. I had to do some alterations to get the arches to fit together due to where the bolt holes were misaligned. Look good now I have put them up. Would recommend some fairly sturdy anchor pegs. I did not use the ones supplied as not strong enough for the arches.

nice arch goes together quite simply, but the holding pegs for the bottom are a joke they wouldnt hold down a kids wigwam. Concreted mine in, would be better if the bottom of the legs were a little longer to be better able to do this. delivery driver lifted the flat packed arch over a six foot gate rather than redeliver, luckily was not damaged.

The arch is very well designed and easily put together. It will be a lovely feature in our garden for a very long time.

Strong robust archway which is perfect for my fully developed wisteria. Easy to assemble and value for money!

Not yet checked or erected but it's out of the box now and the bits look OK but still in their wrapping. It was delivered by one guy. I am 80 so it was a struggle for me to shift it just 5 metres from the drive where it was dropped off to inside my rear gate. At the time I didn't quite think of removing the parts from the box to make it lighter !! But all in all, a great service by your Company and I would be prepared to recommend you.

Solid, easy to assemble and looks great. What more could you want?

Compared with other arches this one is more robust and attractive. The price is v.competitive and the arch is easy to assemble. There were some features that could be improved, but I guess then the price would be a lot higher .

Overall the Rowlinson arch is very nice. However it is not made well. Two of the brackets were bent, one had been welded on in the wrong place. The overall standard of welding was poor and in places unsightly. It was not so easy to put up as it was extremely difficult to get the arch pieces to fit together. Also the metals pins sent to secure to ground are inadequate. This is absolutely not British craftsmanship at its best. It was delivered on time and reasonable well-packaged.

A good product, easy to assemble, but the metal tent pegs supplied to hold it down - presumably by pushing them into the earth - are useless for an arch of this size and weight which, if it fell (if a child climbed on it for example) , could seriously injure someone. I dug holes where the legs were to be sited, filled them with concrete and put the base of the legs into the cement, with the tent pegs pushed into the concrete as well. Now nice and solid.

This Arch was exactly what I was looking for. It is sturdy and looks great in my garden.

As per previous reviews the holes were a little tight to align but I slackened off the nuts and all worked fine. I then tightened and levelled in situ.

When will I receive my order?

Delivery Estimates are in working days, and the estimated delivery time for each product is shown above the ‘add to basket’ button on the product page.

Deliveries are mostly prearranged directly with yourself within a few days of placing an order; being booked in directly with a member of the delivery team/carriers. This can help to confirm a working delivery date which is best for you. When ordering, please provide an active mobile phone number to help delivery to be promptly booked in, and to ensure that there is no delay in receiving your order.

Please note, that some smaller items which can be posted or go via small carrier may be dispatched immediately, without contacting you first. If you have any doubts over your order status please contact us.

Will I receive a timeslot for my delivery?

As we use a wide range of carriers for delivery, you may not receive a time slot for your order. With most orders, you would be contacted first to arrange a delivery date, so you know in advance what day delivery has been booked in for. If you know you won’t be available for your pre-arranged day of delivery, please let us know in advance and we can pass this on to the carriers to investigate the possibility of your delivery being left with a neighbour or in a safe place.

Delivery Lead Times are Estimates; if you’re looking to receive a product by or on a certain date, please contact our customer service team before ordering for help and advice.

There may be occasions where we can dispatch items sooner, should there be space available on a delivery run. If you are looking to receive a product sooner than the estimated delivery lead time, please contact us and we can see check delivery availability to see if this is possible.

Some smaller products are applicable for next day delivery. This will be shown in the stock message on the product page, and at stage three of checkout.

A selection of the brands which we sell are unfortunately subject to certain geographical delivery exemptions. Please see our Delivery & Returns page for further details.

Can I change my mind and return my order?

If you no longer require an item or if it just isn’t for you, you can return any product(s) as a change of mind within 14 days of receipt of the good(s). This is assuming that the good(s) are unused, in the original packaging, and in the original resaleable condition. Simply contact us at sales@gardenstreet.co.uk for the return address of any items you wish to return.

Please note that perishable goods (such as turf and bulk bags of soil), and made to measure items (Burbage Fencing/Gates/Railings etc) are excluded from return.

In Stock Out of Stock   |   3 - 7 Working Days Delivery
Loading...
Ask a Question
Email a Friend
Price Match
Finance Available from £0 per month
?
Top
;